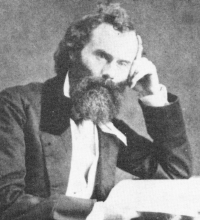 In his early career, he helped establish and became the first president of the Cleveland Library Association in 1846 (later the Leonard Case Reference Library, today the location of the Metzenbaum U.S. Courthouse). In 1850, he founded the short-lived Cleveland University in the city's Tremont neighborhood. He also served as president of the Cleveland, Ashtabula, and Painesville Railroad and secured the funding to finish its Chicago-to-Buffalo route. In 1846, Case was elected to Cleveland City Council and served as an alderman from 1847 to 1849. In 1850, Case was elected mayor of Cleveland. During his tenure, Case "organized the city workhouse, poorhouse, and house of refuge, as well as the city finances." He is often credited with establishing the Cleveland nickname, "The Forest City", as a result of a citywide fruit-tree planting campaign. Provided by Wikipedia
1