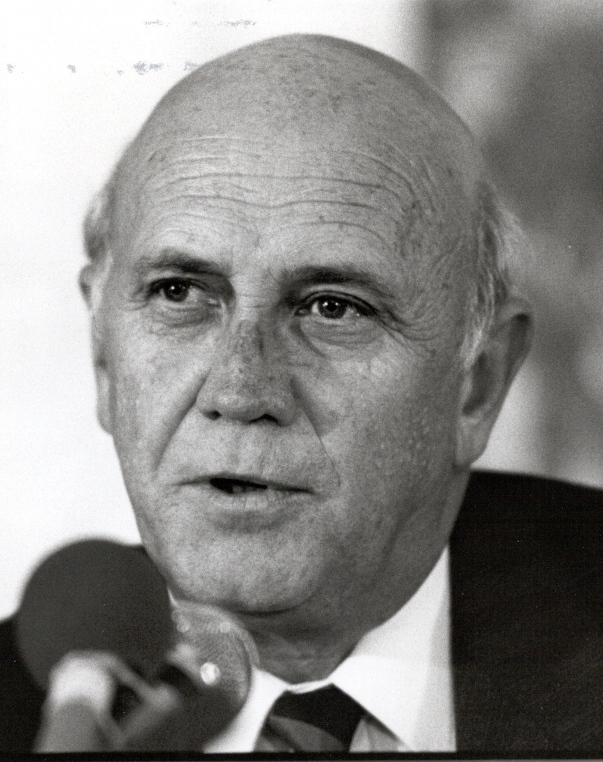 Frederik Willem de Klerk (, ; born 18 March 1936) is a retired South African politician, who served as State President of South Africa from 1989 to 1994 and as Deputy President from 1994 to 1996. As South Africa's last head of state from the era of white-minority rule, he and his government dismantled the apartheid system and introduced universal suffrage. Ideologically a conservative and an economic liberal, he led the National Party from 1989 to 1997.

Born in Johannesburg, South Africa to an influential Afrikaner family, de Klerk studied at Potchefstroom University before pursuing a career in law. Joining the National Party, to which he had family ties, he was elected to parliament and sat in the white-minority government of P. W. Botha, holding a succession of ministerial posts. As a minister, he supported and enforced apartheid, a system of racial segregation that privileged white South Africans.

After Botha resigned in 1989, de Klerk replaced him, first as leader of the National Party and then as State President. Although observers expected him to continue Botha's defence of apartheid, de Klerk decided to end the policy. He was aware that growing ethnic animosity and violence was leading South Africa into a racial civil war. Amid this violence, the state security forces committed widespread human rights abuses and encouraged violence between the Xhosa and Zulu people, although de Klerk later denied sanctioning such actions. He permitted anti-apartheid marches to take place, legalised a range of previously banned anti-apartheid political parties, and freed imprisoned anti-apartheid activists, including Nelson Mandela. He also dismantled South Africa's nuclear weapons program.

De Klerk negotiated with Mandela to fully dismantle apartheid and establish a transition to universal suffrage. In 1993, he publicly apologised for apartheid's harmful effects, but not for apartheid itself. He oversaw the 1994 non-racial election in which Mandela led the African National Congress (ANC) to victory; de Klerk's National Party took second place. De Klerk then became Deputy President in Mandela's ANC-led coalition, the Government of National Unity. In this position, he supported the government's liberal economic policies but opposed the Truth and Reconciliation Commission set up to investigate past human rights abuses because he wanted total amnesty for political crimes. His working relationship with Mandela was strained, although he later spoke fondly of him. In May 1996, after the National Party objected to the new constitution, de Klerk withdrew it from the coalition government; the party disbanded the following year and reformed as the New National Party. In 1997, he retired from active politics and has since then lectured internationally.

De Klerk is a controversial figure. He received many awards, including the Nobel Peace Prize, earning wide praise for dismantling apartheid and bringing universal suffrage to South Africa. Conversely, anti-apartheid activists criticised him for offering only a qualified apology for apartheid and for ignoring the human rights abuses by state security forces. Meanwhile, some white South Africans accused him of betrayal for abandoning apartheid. Provided by Wikipedia
1