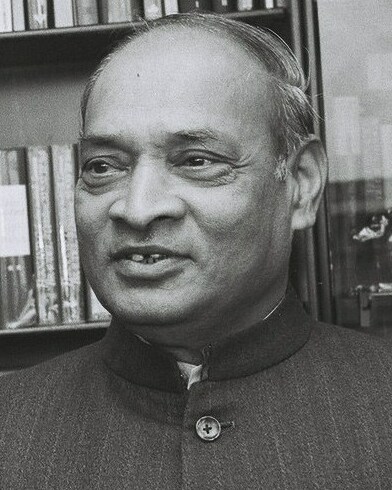 Pamulaparthi Venkata Narasimha Rao (28 June 1921 – 23 December 2004) was an Indian lawyer, statesman and politician who served as the 9th Prime Minister of India from 1991 to 1996. He is known for introducing various liberal reforms to India's economy. His ascendancy to the prime ministership was politically significant in that he was the second holder of this office from a non-Hindi-speaking region and the first from South India (United Andhra Pradesh). He led an important administration, overseeing a major economic transformation and several home incidents affecting national security of India. Rao, who held the Industries portfolio, was personally responsible for the dismantling of the Licence Raj, as this came under the purview of the Ministry of Commerce and Industry, reversing the economic policies of Rajiv Gandhi's government. Future prime ministers Atal Bihari Vajpayee and Manmohan Singh continued the economic reform policies pioneered by Rao's government. He employed Manmohan Singh as his Finance Minister to embark on historic economic transition. With Rao's mandate, Manmohan Singh launched India's globalisation angle of the reforms that implemented the International Monetary Fund (IMF) policies to rescue the almost bankrupt nation from economic collapse. Rao was also referred to as ''Chanakya'' for his ability to steer economic and political legislation through the parliament at a time when he headed a minority government.

11th President of India APJ Abdul Kalam described Rao as a "patriotic statesman who believed that the nation is bigger than the political system". Kalam acknowledged that Rao, had in fact, asked him to get ready for testing nuclear weapons in 1996, but they were not carried out, due to the change of government pursuant to the 1996 Indian general election. The Vajpayee-led NDA government later conducted the nuclear tests in 1998. It emerged later, that Rao had briefed Vajpayee on the state of readiness for nuclear tests, paving the way for this decision.

Rao's term as Prime Minister was an eventful one in India's history. Besides marking a paradigm shift from the industrialising, mixed economic model of Jawaharlal Nehru to a market driven one, his years as Prime Minister also saw the emergence of the Bharatiya Janata Party (BJP), a major right-wing party, as an alternative to the Indian National Congress which had been governing India for most of its post-independence history.

Rao died in 2004 of a heart attack in New Delhi. He was cremated in Hyderabad. He was a versatile thinker with interests in a variety of subjects (other than politics) such as literature and computer software (including computer programming). He spoke 17 languages.

Although heavily criticised during his tenure and even sidelined later by his own party, retrospective evaluations have been kinder, even positioning him as one of the best prime ministers of India in various polls and analyses. His achievements include steering India through the 1991 economic crisis, completing a tenure with a minority government, establishing diplomatic relations with Israel, starting India's Look East policy, rekindling India's nuclear programme, defeating the 1994 United Nations resolution against India, effectively handling and crushing insurgency in Punjab, tough policy against terrorism in Kashmir, and opening partial diplomatic relations with Taiwan. Provided by Wikipedia
1