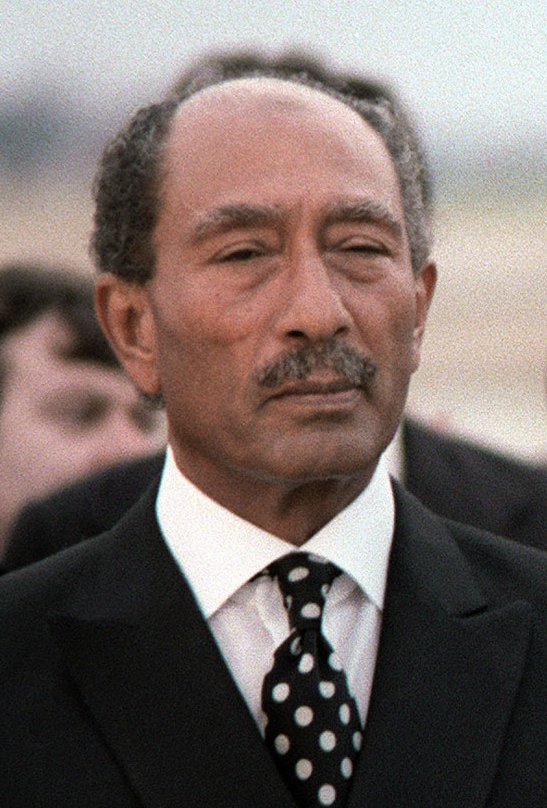 Muhammad Anwar el-Sadat, also , ; , }} (25 December 1918 – 6 October 1981) was an Egyptian politician who served as the third President of Egypt, from 15 October 1970 until his assassination by fundamentalist army officers on 6 October 1981. Sadat was a senior member of the Free Officers who overthrew King Farouk in the Egyptian Revolution of 1952, and a close confidant of President Gamal Abdel Nasser, under whom he served as Vice President twice and whom he succeeded as president in 1970. In 1978, Sadat and Menachem Begin, Prime Minister of Israel, signed a peace treaty in cooperation with United States President Jimmy Carter, for which they were recognized with the Nobel Peace Prize.

In his eleven years as president, he changed Egypt's trajectory, departing from many of the political and economic tenets of Nasserism, re-instituting a multi-party system, and launching the Infitah economic policy. As President, he led Egypt in the Yom Kippur War of 1973 to regain Egypt's Sinai Peninsula, which Israel had occupied since the Six-Day War of 1967, making him a hero in Egypt and, for a time, the wider Arab World. Afterwards, he engaged in negotiations with Israel, culminating in the Egypt–Israel Peace Treaty; this won him and Menachem Begin the Nobel Peace Prize, making Sadat the first Muslim Nobel laureate. Although reaction to the treaty—which resulted in the return of Sinai to Egypt—was generally favorable among Egyptians, it was rejected by the country's Muslim Brotherhood and the left, which felt Sadat had abandoned efforts to ensure a Palestinian state. With the exception of Sudan, the Arab world and the Palestine Liberation Organization (PLO) strongly opposed Sadat's efforts to make a separate peace with Israel without prior consultations with the Arab states. His refusal to reconcile with them over the Palestinian issue resulted in Egypt being suspended from the Arab League from 1979 to 1989. The peace treaty was also one of the primary factors that led to his assassination; on 6 October 1981, militants led by Khalid Islambouli opened fire on Sadat with automatic rifles during the 6 October parade in Cairo, killing him. Provided by Wikipedia
1